Potoos (family Nyctibiidae) are a group of near passerine birds related to the nightjars and frogmouths. Potoos are only active at night and thus sleep during the day. Like most other nocturnal birds, they also have plumage that acts as camouflage and gives them the appearance of a piece of tree bark or broken off stump. Although potoos have small beaks, their mouths are huge. They have such wide, large mouths to aid them in catching moths, beetles, and other insects during the night.
The common potoo (Nyctibius griseus) – also known as the grey potoo, lesser potoo or poor-me-one – is a nocturnal bird which breeds in tropical Central and South America from Nicaragua to northern Argentina and northern Uruguay.
The Great Potoo (Nyctibius grandis) is also known at the Stick Bird because it blends into a tree and looks like a stick. 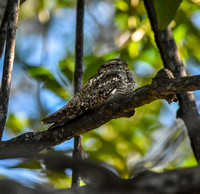 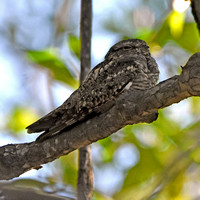 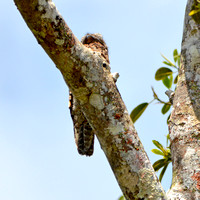