The Great black backed gull (Gull marinus), also known as the greater black-backed gull or, informally, as the black-back, is slightly smaller than a herring gull. The legs and feet are pink; these facts together with the size of the bird are distinguishing features. It is distinguished by its sheer size and unmistakable black back and wings. Adults are blacker than the smaller lesser black-backed gull. The bill is yellow with a red spot, like the Lesser Black-backed Gull and Herring Gull. The eye is yellow with a red orbital ring. In the winter the head is lightly streaked with grey.

The lesser black-backed gull (Larus fuscus) is a large gull that breeds on the Atlantic coasts of Europe. The legs are yellow (whereas the Greater Black backed gull and the Herring Gull's legs are pink).The scientific name is from Latin. Larus appears to have referred to a gull or other large seabird, and fuscus meant black or brown. It is very slightly smaller than the Herring Gull, but has longer legs and a thinner bill. Juveniles and first winter immature birds are similar to immature Herring Gulls but darker. A good way to remember whether it is the Lesser or Great Black-backed Gull with the yellow legs is: "the lesser fellow has the yellow". 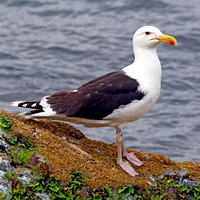 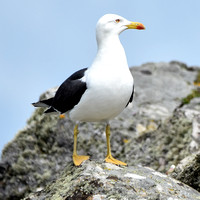