The Somali fiscal (Lanius somalicus), like other shrikes, sometimes impales its prey on thorns for consumption later – males rely on having well-stocked larders to attract females. To ensure that females see their caches, males often include colourful but inedible items in their caches.
Other common names include the Karoli fiscal, the Somali fiscal shrike and the Somali shrike. Found in Djibouti, Ethiopia, Kenya, and Somalia, it prefers arid subtropical or tropical scrub. 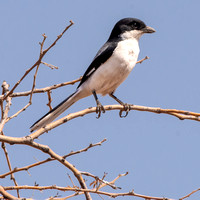