The Ross's goose (Anser rossii) is a North American species of goose. It has several differences to the snow goose: Shorter and rounder body, proportionately shorter neck, rounder and less elongated head, shorter and stubbier bill, grey/blue base of upper mandible with caruncles developing with age. The snow goose (Chen caerulescens), also known as the blue goose, gets its name from the typically white plumage. During migration the Snow Goose flies so high it can barely be seen. It breeds north of the timberline in Greenland, Canada, Alaska, and the northeastern tip of Siberia, and spends winters in warm parts of North America from southwestern British Columbia through parts of the United States to Mexico. The snow goose has two colour plumage morphs, white (snow) or grey/blue (blue), thus the common description as "snows" and "blues." Sexes are identical within each phase.
See also: Ross's snow goose 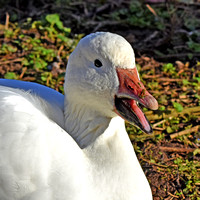 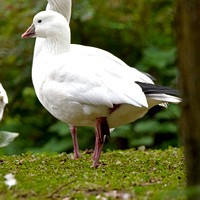 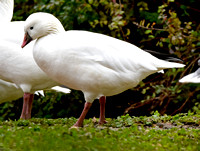 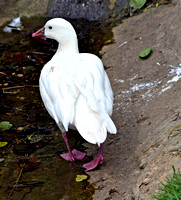