The Carib grackle (Quiscalus lugubris) is a New World tropical blackbird, a resident breeder in the Lesser Antilles and northern South America east of the Andes, from Colombia east to Venezuela and north-eastern Brazil. It is smaller and more sexually dimorphic than its more northern Caribbean relative, the Greater Antillean Grackle (Quiscalus niger). The male shows entirely black plumage, with slight purplish gloss. The tail is relatively long, but less than in other grackles’ species. Its tail is graduated and wedge-shaped. The female has duller plumage, showing dark sooty brown colour on upper parts. The tail is blackish-brown and shows a dull green gloss.
Underparts are paler with whitish throat, grey-buff breast, and darker greyish-brown flanks and vent. The Carib grackle is a highly gregarious species, foraging on the ground for insects, other invertebrates, or scraps. It can become very tame and bold, entering restaurants to seek food, normally feeding on leftovers. It will form groups to attack potential predators, such as dogs, mongooses or humans, and at night it roosts colonially. 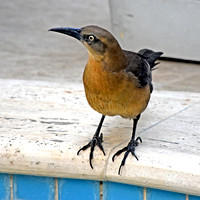 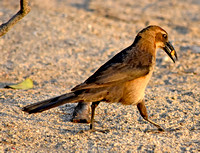 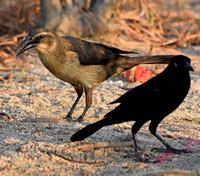