Darwin’s Finches are named after the great biologist Charles Darwin, the explorer who discovered the theory of evolution on the Galapagos Isles during a voyage in 1835. Darwin's finches (also known as the Galápagos finches) are a group of 14 species of passerine birds which vary in the shape and size of their beaks. All of Darwin’s Finches are sparrow sized and similar in appearance with grey, brown, black or olive feathers and 13 of the species are resident on the Galapagos Islands. Darwin collected some of these finches when he visited the Galapagos Islands, and it is often stated that the finches were key to the development of his theory of evolution. They are used as evidence for his theory in many textbooks. Here are the names of all 14 of Darwin’s Finches. They are divided into 4 groups:
Genus Geospiza: 1. Large Cactus-finch 2. Sharp-beaked Ground-finch (Vampire Finch – sub species of above) 3. Medium Ground-finch 4. Small Ground-finch 5. Large Ground-finch (Darwin’s Large Ground-finch – possibly extinct) 6. Common Cactus-finch
Genus Camarhynchus: 7. Vegetarian Finch 8. Large Tree-finch 9. edium Tree-finch 10. Small Tree-finch 11. Woodpecker Finch 12. Mangrove Finch
Genus Certhidea: 13. Warbler Finch
Genus Pinaroloxias: 14. Cocos Island Finch 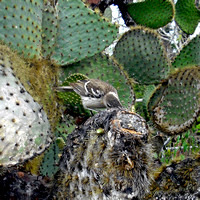