The Indian Ringneck Parrot or Parakeet (Psittacula krameri) is also sometimes referred to as Rose-ringed Parakeet or, simply, Ring-necked Parakeet. The genus name Psittacula is a diminutive of Latin psittacus, "parrot", and the specific krameri commemorates the Austrian naturalist Wilhelm Heinrich Kramer. One of the few parrot species that have successfully adapted to living in disturbed habitats, it has withstood the onslaught of urbanisation and deforestation. Typical wild Indian Ringnecks are green with undertones of blue, although mutations in a range of other colours also exist. This includes buttercup yellow and the increasingly popular powder blue. They are native to Asia and Africa and can be seen in the forests or arid environments.
See also: Rose-ringed parakeet 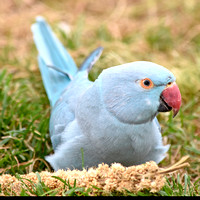 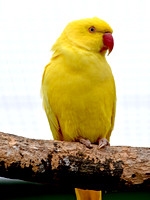 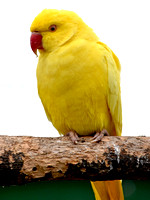 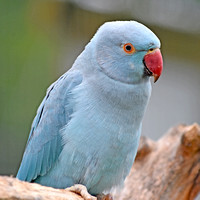