Chachalacas are mainly brown birds from the genus Ortalis. These birds are found in wooded habitats in Northern/Central America.
The grey-headed chachalaca (Ortalis cinereiceps) is a turkey-like birds found in Latin America that was named for its most distinctive characteristic - its grey head. It is found in thickets with emergent trees and usually remains in the canopy of trees walking along tree branches in woodland areas, thickets, around clearings, and along water ways.
The Plain Chachalaca (Ortalis vetula) is the only member of the family of guans, currasows, and chachalacas to reach the United States. typically occurs in small groups in tall, thorny thickets, scrubland, and second-growth forest edge. It is native to the United States and Mexico as well as Belize, Guatemala, Costa Rica, Honduras, and Nicaragua, this bird prefers subtropical or tropical forest and shrubland ecosystems. 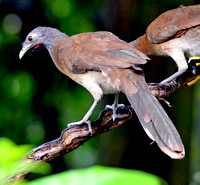 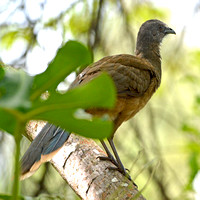 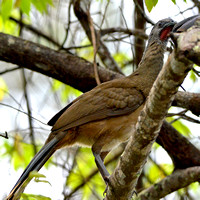