The owl that was once called white-faced scops owl and is sometimes better known as The Transformer Owl has been split into two different species – the Northern and the Southern white-faced owls. Northern and Southern refers to Africa, where the clever, orange-eyed, white-faced night birds live. Resident in Africa, the northern white-faced owl (Ptilopsis leucotis) lives above the equator, the Southern White-faced Owl (Ptilopsis granti) lives below the equator. It used to be considered a subspecies of the northern bird. Said to be darker and more streaky, it has a continuous babbling call. The white-faced scops owl is called the Transformer due to its ability to make itself appear larger or smaller depending on the opponent.
See also: Northern white faced scops owl 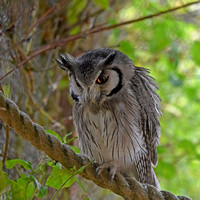 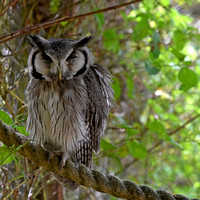 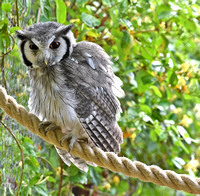