The chickadees are a group of North American birds in the tit family included in the genus Poecile. There are seven species of chickadee in the world. Chickadees, along with titmice, belong to the family Paridae. This family of songbirds also includes birds known as tits.
The black-capped chickadees (Poecile atricapillus) are a small, nonmigratory, North American songbird that live in deciduous and mixed forests. They are a member of the genus Parus, are the most common and geographically widespread chickadee, and are the state bird of both Maine and Massachusetts as well as the provincial bird of New Brunswick. They get their 'black-capped' name from the black streak that runs from their beak to neck over the top of their head. They also have a distinctive black bib on the underside of their neck, with white streaks down the sides of their face. The call of the chickadee ("chick-a-dee-dee-dee") can be incredibly complex, and can convey information about their flock, mating status, and nearby threats. Chickadees will add more 'dee' sounds to their call when a threat is nearby.
The Mountain Chickadee (Poecile gambeli) is one of the most common birds of the Western montane coniferous forests - the species name honours naturalist William Gambel. It is only about 5inches long; it is similar to the Black-capped Chickadee but has a white line over each eye. Their range is from British Columbia, the Rocky Mountains, through the Cascade and Sierra Nevada ranges, down to southern California, Arizona, New Mexico, and Texas. There are two unusual things about Mountain Chickadees. First, they are able to lower their metabolic rate to conserve energy on cold nights. Second, the female will actually “hiss” like a snake to discourage predators while she is sitting on her nest! Mountain Chickadees are insect gleaners. They are very acrobatic and agile when feeding, darting quickly from branch to branch on the outer edges of the trees. They eat insects, spiders, and eggs, from twigs, leaves and branches. They are known to store food in the fall so they can retrieve it later during the winter when food is scarce. 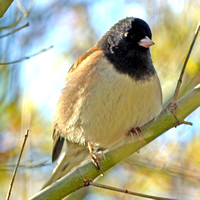 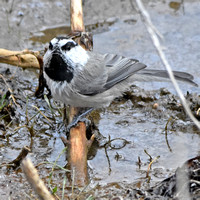