Cardinals, in the family Cardinalidae, are passerine birds found in North and South America. They are also known as cardinal-grosbeaks and cardinal-buntings.
The red crested cardinal (Paroaria coronata) gets its common name from its prominent red head and crest. Despite its name it is not closely related to birds in the Cardinal family. It is native to South America, but was introduced to the Hawaiian Islands around 1930. In Hawaii, these birds prefer parks, lawns and dry thickets. But within their South American range, they can be found in subtropical or tropical dry shrubland and degraded forests. Also known as the Brazilian Cardinal, this bird is unique compared to its mainland cousins in that both males and females sing and have the same general markings. They tend to eat a variety of food including seeds, bugs, and fruit. 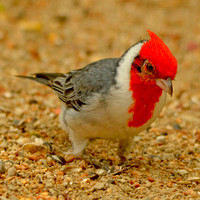 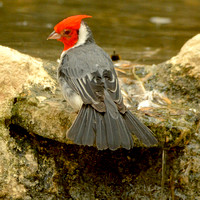