The cockatiel (Nymphicus hollandicus), also known as the quarrion and the weiro, is a bird that is a member of the cockatoo family endemic to Australia where it was first discovered in 1770. It did not become popular until the Australian gold rush in the nineteen hundreds. Cockatiels live in flocks of up to 1000 or more where food is plentiful. Their main choices of food are grasses, crops (like wheat) and the seed from trees like acacia. It is said that the name was invented by a man named Jamrach who formed it from the dutch word "Kakatielje" - which was a dutch sailor's variant of the portugese word ”cacatitho” (some sources also say ”cacatilho” or ”cacatielho”), meaning a "little cockatoo". It has also been known as the Crested Parakeet, Cockatoo Parrot, Yellow Top-knottes Parrot, Corella, and Quarrion. Among Aboriginals the cockatiel is also known as "wamba", "wee-arra", "bula-doota" ja "woo-ra-ling".
See also:
Whiteface lutino cockatiel 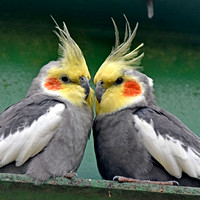