The red crowned crane (Grus japonensis) also called the Japanese and Manchurian crane, has white primaries that is unique in cranes. It is the second rarest crane in the world after the North American Whooper crane. In the Orient, it is sacred and seen as a symbol of fidelity, love and longevity. It is resident on Hokkaido (Japan), but this species also breeds in NE China and adjacent SE Russia. It winters in Korea and Jiangsu, CE China and is the most aquatic of the cranes and prefers deep waters. Red-crowned cranes almost became fashion victims at the beginning of the 20th century. Known in Japan as tancho ("red mountain") they were hunted to the brink of extinction in Japan so that their stunning plumage could be used to adorn hats and other fashion accessories. Hunting these cranes is now illegal. This species lives in open marshes with reeds and sedges, and in wet meadows providing a good visibility. It winters at rivers, rice fields, freshwater marshes and coastal salt-marshes and mudflats.
See also: Japanese crane 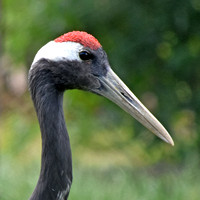 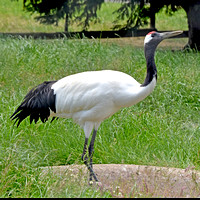 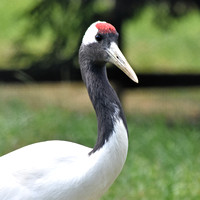