The solitary jack snipe (Lymnocryptes minimus) uses its long bill to probe the mud for insects while moving in a slight crouch and constantly bouncing up and down as if it were made of springs. It is named Jack because traditionally the word referred to small – as in bowls, the small ball is called the jack. A small stocky wader, it is the smallest snipe, and the only member of the genus Lymnocryptes. Similar to the more familiar common snipe, its secretive nature is reflected in its scientific name. Lymnocryptes is derived from the Greek words limne, meaning marsh, and krupto, meaning to hide. The species name minimus is Latin for smallest. Jack snipes are migratory, spending the non-breeding period in Great Britain, Atlantic and Mediterranean coastal Europe, Africa, and India. They breed in marshes, bogs, tundra and wet meadows with short vegetation in northern Europe and northern Russia. Snipes flock together, but the jack snipes travel alone.
See also: Common snipe 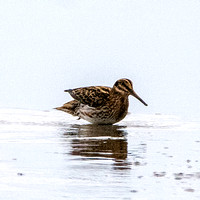 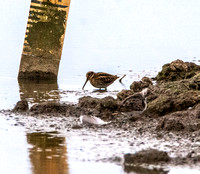 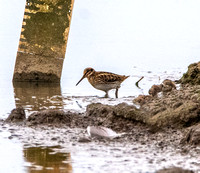 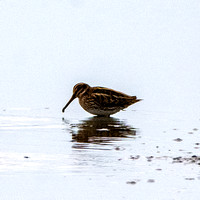