Grebes are small to medium-sized water birds, of the family Podicipediformes, characterised by pointed bills (long and dagger-like in larger species), round bodies, tiny tails and legs set far back on the body. Grebes resemble the loon and the duck – DNA testing suggests that they may be most closely related to the flamingo. They have short wings, vestigial tails, and long, individually webbed toes on feet that are set far back on a short, stubby body. They float lower in the water than do ducks, and at the approach of danger they sink progressively lower and then submerge, a practice which has given them the name helldiver. They are poor fliers and awkward on land; their loosely constructed nests are either hidden in the rushes and weeds at the water's edge or placed on floating vegetation fastened to growing plants. Many grebes cover their eggs with refuse when they leave the nest, and some carry the young on their backs. They have complex courtship rituals, including dancing in pairs on the water.
See also: Black-necked grebe, Clark’s grebe, Great crested grebe, Least grebe, Little grebe, Western grebe 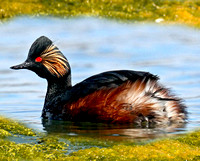 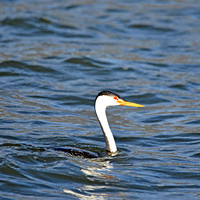 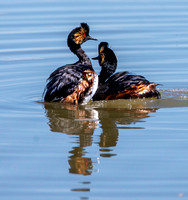