Emerald toucanets (Aulacorhynchus prasinus) have a mainly emerald green plumage (for which they were named), except for a bronzy tinge on the crown and forecrown, a yellowy bronze tint on the upper back, a blue patch around each eye, and the chestnut or rufous-coloured vent and tail-tip. They are found in Central and South America.
The Santa Marta toucanet (Aulacorhynchus lautus) is endemic to the Santa Marta Mountains in northern Colombia. 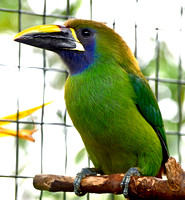 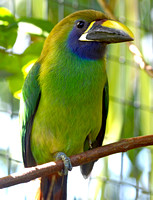