Caracara is a genus of birds of prey in the family Falconidae found throughout a large part of the Americas. Also called carrion hawk, any of about 10 species of birds of prey. The caracara is the most terrestrial bird in the falcon group.
The crested caracara (Caracara cheriway) the national bird of Mexico, lives in parts of North, Central, and South America. The bird is mostly black with a black cap that is crested at the end. The face is red, the beak hooked and gray. The throat and neck and base of the tail are white. There are white patches near the wing tips.
The striated caracara (Phalcoboenus australis) is a bird of prey of the family Falconidae. In the Falkland Islands it is known as the Johnny rook.
The yellow-headed caracara (Milvago chimachima) is a small, pale caracara of open habitats in lowlands from Costa Rica south to northern Argentina and Uruguay.
See also:
Crested caracara
Striated caracara
Yellow headed caracara 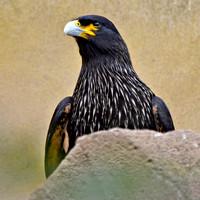 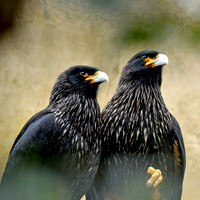 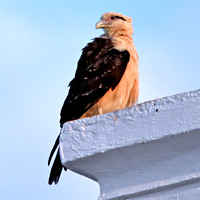