The yellow-throated longclaw (Macronyx croceus) is named for its unusually long hind claws, which are thought to help in walking on grass. Found in much of sub-Saharan Africa, it resembles Meadowlarks found in North America due to convergent evolution, when two distantly related species independently develop a very similar trait. The markings of the yellow-throated longclaw are very similar to the American meadowlarks and live in similar habitats -- dry savanna, semi-arid prairies and grasslands -- and have a smilier diet -- they consume insects and nest on the ground.
See also: Eastern meadowlark, Western meadowlark 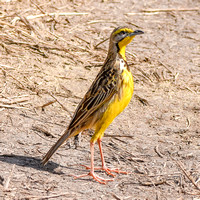 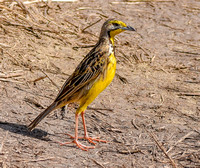 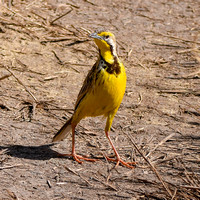