A coucal is one of about 30 species of birds in the cuckoo family – all in the subfamily Centropodinae and the genus Centropus. Many coucals have a long claw on their hind toe (hallux). The genus name comes from the Greek kentron (a spike) and pous (foot) describing this hallux claw. Unlike many cuckoos, coucals are not brood parasites – but they are sex-role reversed in that the smaller male provides most of the parental care. At least one coucal species, the Black Coucal, is polyandrous – the practice of having more than one husband or male mate at one time.
See also: Black coucal, White browed coucal 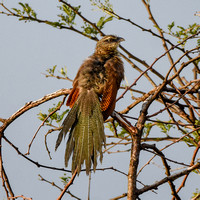 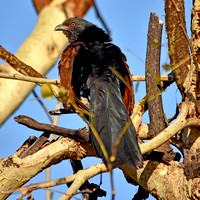 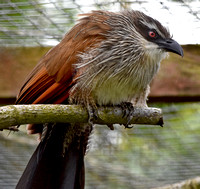